The name Myers first became associated with automotive retailing and service in Ottawa in 1942. At the time Gordon Myers established Myers Motors as the successor dealership to Pinks Limited which was the original General Motors
Dealership in Ottawa. Since that time Myers has had four owners. Bob Moore followed Gordon Myers in 1954 and Neil McDonald took over from Bob in 1959. Hank Mews, the current owner, replaced Neil in 1975. 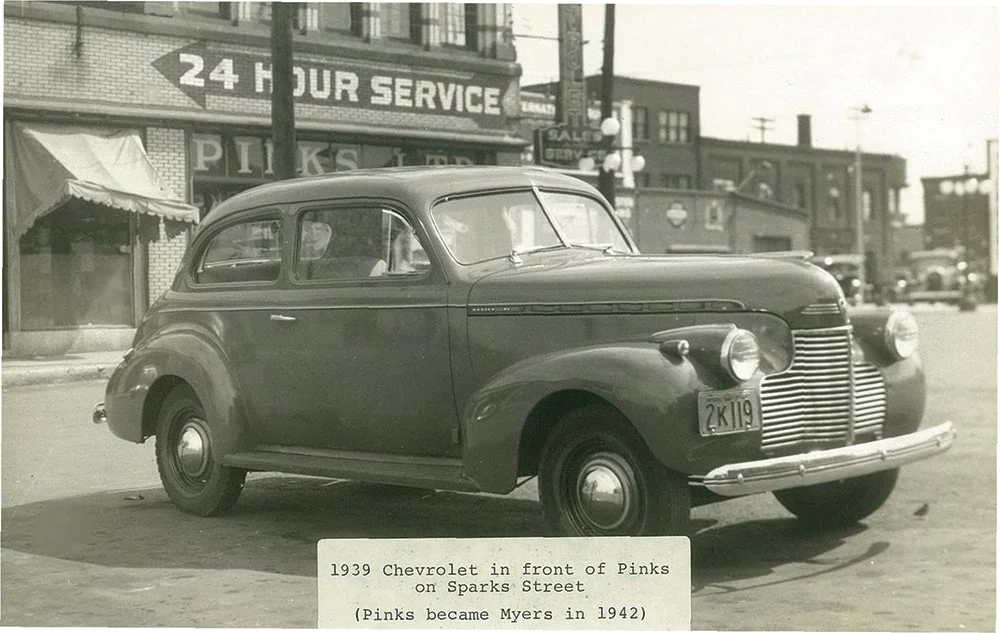 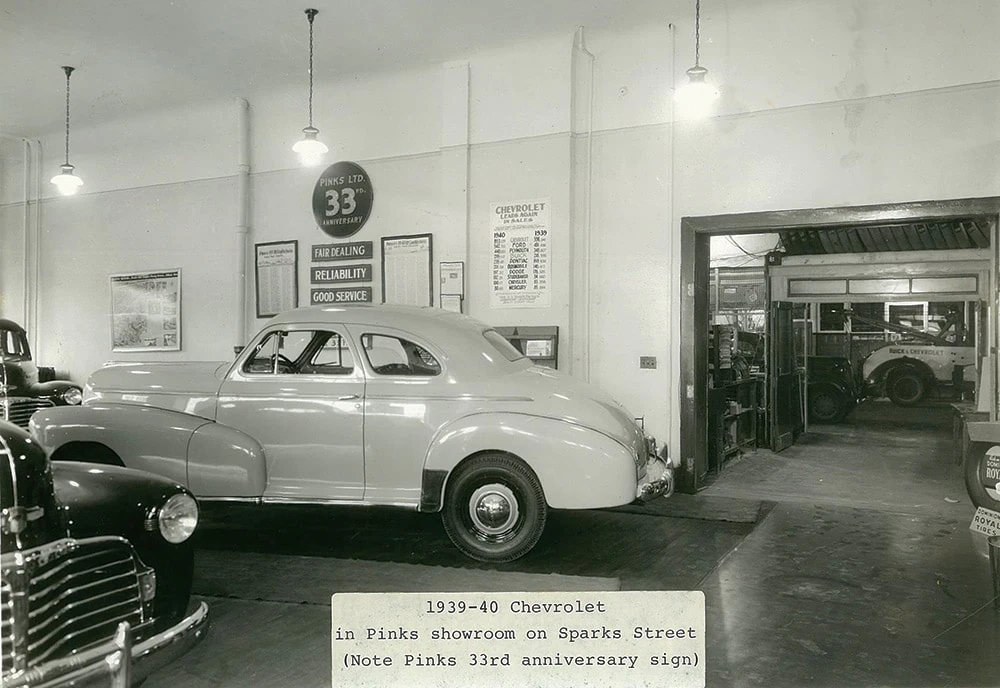 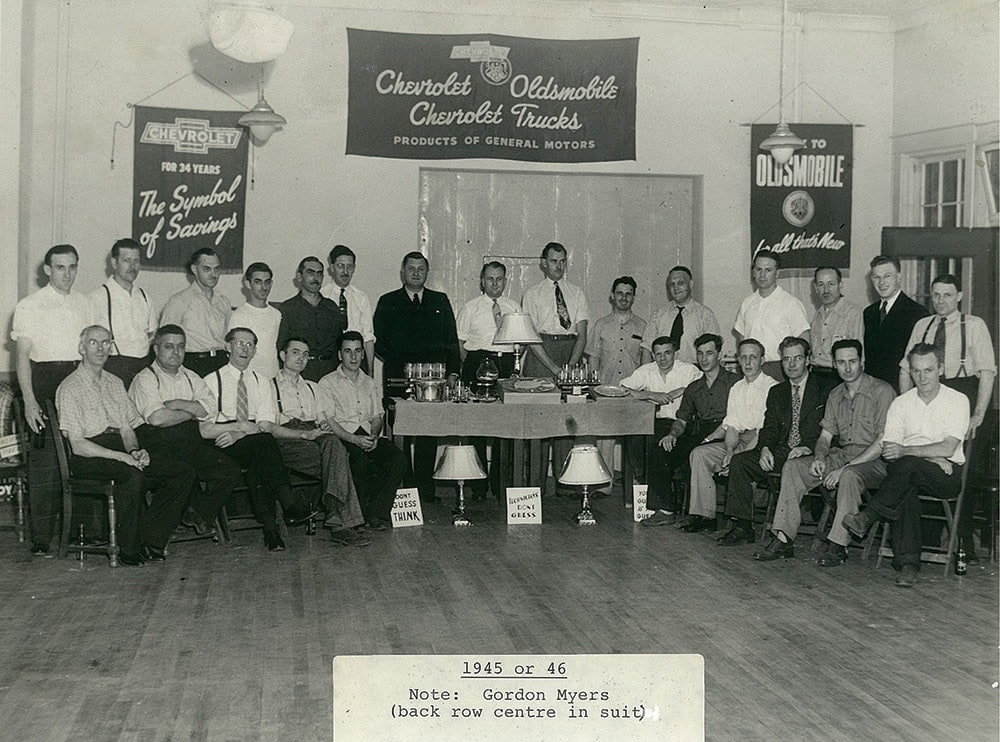 In the beginning, Myers was located on Slater Street in downtown Ottawa. In 1959 a move was made to what was then considered to be suburban Ottawa, on Elgin Street near to where the Queensway was soon to be built. Today Ottawa's main
Police Station is situated on that property. In November 1971 Myers moved to its present location on Baseline at Merivale. Back then we had just over four acres and our building was approximately 35,000 square feet. All departments were
housed under one roof. Between 1984 and 1986 a major expansion program was undertaken. Four acres of land were purchased on Sunderland Street just off Merivale, three miles south of Baseline, and a modern 32 bay, 17,000 square foot Body
and Paint Center was built. Once the new Body and Paint Center was built, our main building was altered to provide 49 mechanical service bays. Then a 17,000 square foot addition was constructed that contains on the main floor our
customer service and reception drive and on the second floor a customer lounge and eating facilities for our customers and staff, as well as all of our administration offices. Over the years we were able to purchase additional property
to the west of our main building which enabled us to erect a building to house our Used Car Department. In total, today we have approximately 70,000 square feet under roof and over 10 acres of property. 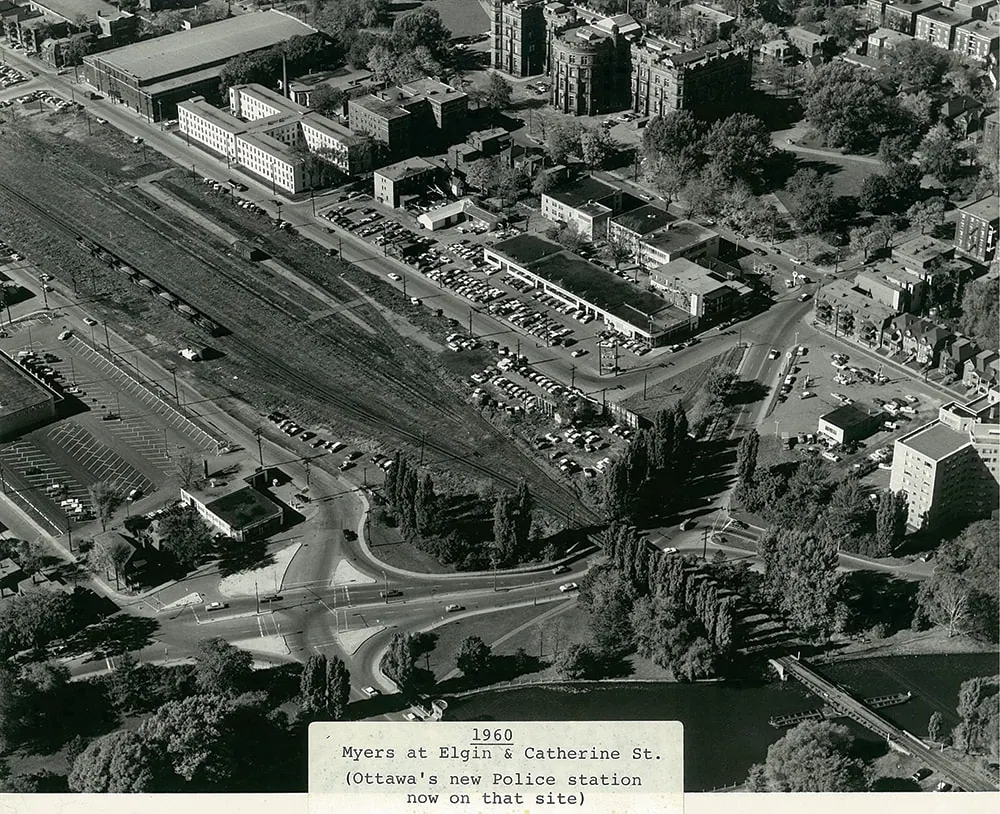 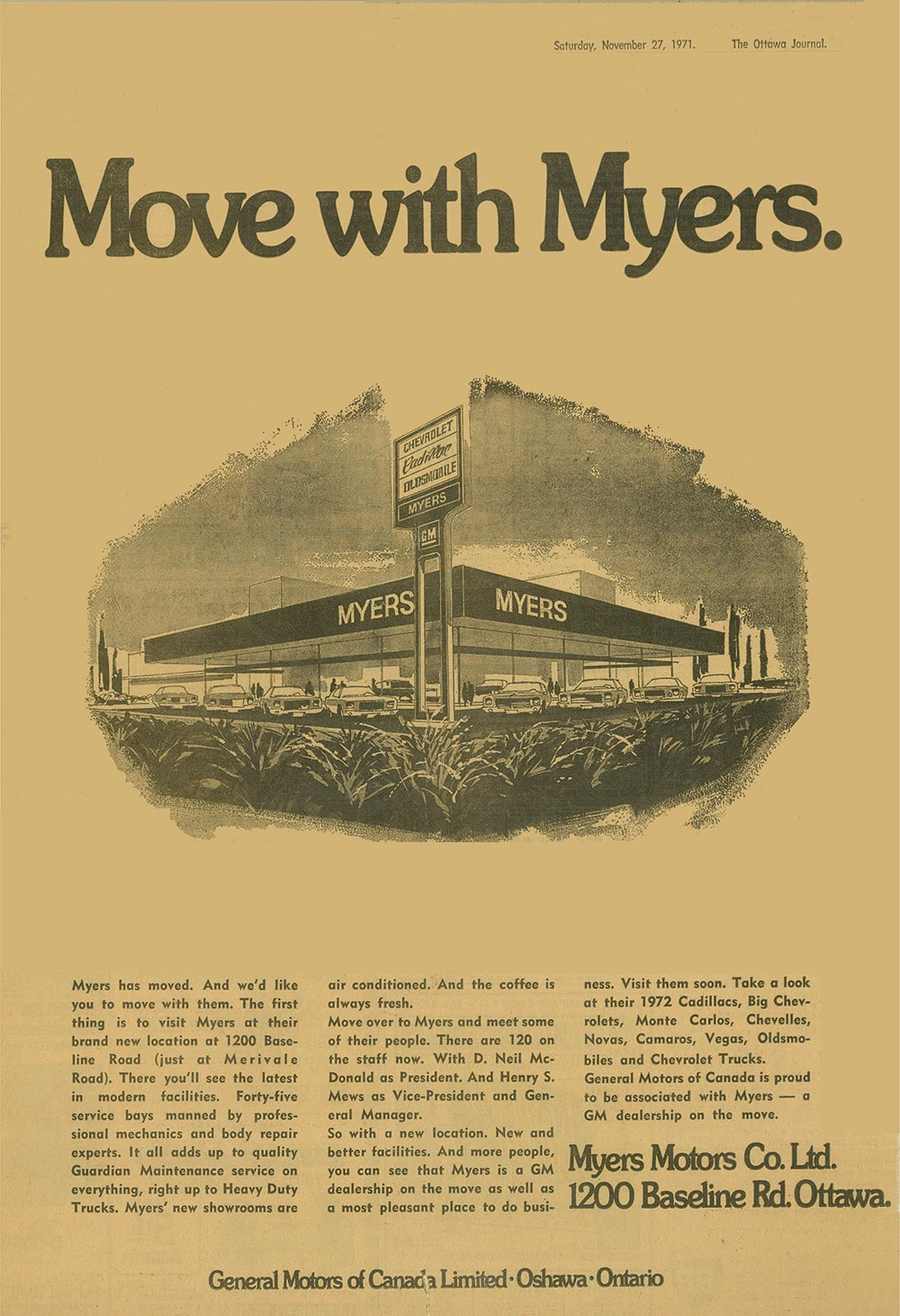 Myers has earned an enviable reputation for volume sales and very high levels of customer satisfaction. We are proud to be recognized as one of Canada's outstanding General Motors Dealerships. Our people have made this possible through
their understanding of and devotion to providing value-added service to our customers. Our President, Hank Mews, joined Myers in February, 1971, as General Manager. Hank was born and grew up in St. John's Newfoundland and after
graduating from high school, his first job was as a salesperson with a Ford dealership in St. John's. From there, being uncertain about what career path to follow, Hank moved to Mainland Canada and over the next few years he tried his
hand as a commercial pilot, as a life insurance salesperson and finally in a Toronto Advertising Agency. In early 1962, Hank joined General Motors and for the next five years worked in Toronto and the Maritimes as a District Sales
Manager, before returning to the Ford Dealership in St. John's as General Manager in 1967. In 1969, Hank had the opportunity to become the owner of that dealership but opted to return to Toronto and search for a dealership elsewhere in
Canada hoping to become a General Motors Dealer. After a short stint as General Sales Manager of a Chevrolet Dealership in Toronto, the Ford Motor Company convinced Hank to join them to manage Ford owned dealerships that had a history
of failure. During the next two years he operated Ford Dealerships in Toronto, Montreal and Moncton. Finally in December 1970, General Motors initiated discussion between Hank and Neil McDonald which resulted in Hank joining Myers in
February 1971 as General Manager with the intention of purchasing the company. This was accomplished in July 1975. 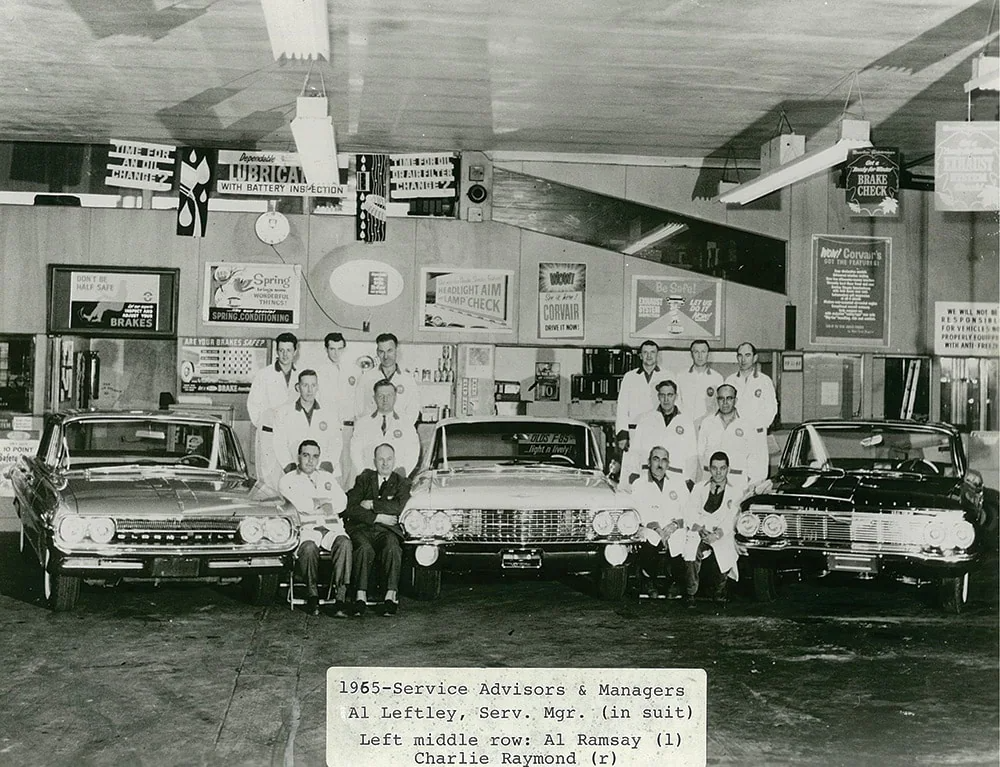 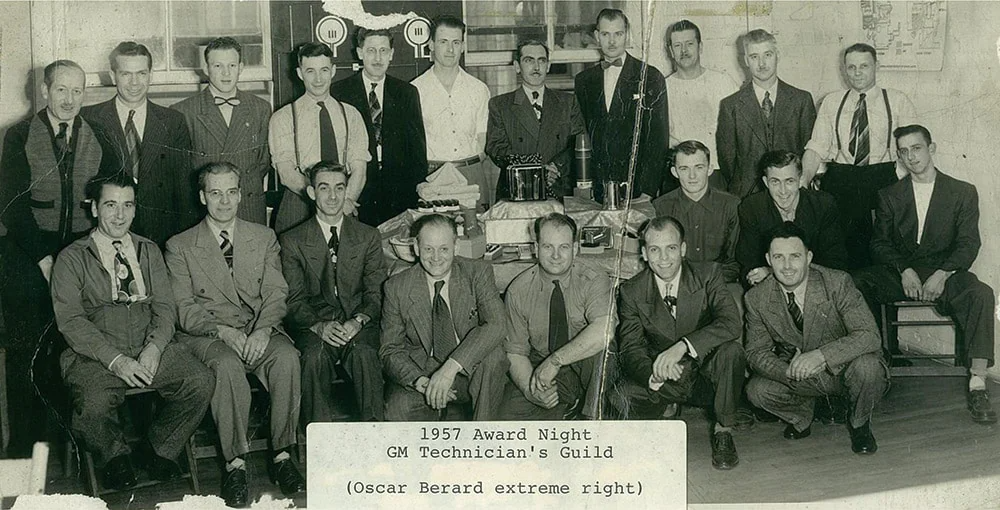 During the early years at Baseline and Merivale it was necessary to increase the ownership base by aggressively working to sell more vehicles. While this of course will always be important, by the mid 1970's the company recognized that
long term success would be dependent on providing our customer with good service. As a result, from that time forward we have concentrated much of our resources, both financial and human, to building a reputation within the company of
being competent, caring and trustworthy. This philosophy has served Myers well. Our Service, Parts and Body and Paint departments have flourished, we have an ever growing base of repeat customers and are recognized by General Motors as
being one of Canada's most outstanding Dealerships. Ours is a very competitive industry. Since 1971 the number of dealerships in the market place has more than doubled. The public have more to choose from and are rightfully asking for
full value in return for their business. We must always remember that service is our product. By making it truly a pleasure to do business with Myers, we can be confident that Myers will continue to be successful throughout the years
ahead.

The Growth of the Myers Automotive Group

With Myers' main location, now called Myers Cadillac Chevrolet Buick GMC, at the corner of Baseline Road and Merivale Road and the Body and Paint Centre on Sunderland Street, now called Myers CarStar, both doing well and
attracting customers from across the Ottawa area, it was time to grow to reach all ends of the city and as many customers as possible.

Myers Hyundai Bells Corners - This addition to the Myers Automotive Group was located at 2164 Robertson Road in the west end of Ottawa in Bells Corners. A new building to house the dealership is currently being built as the
Myers Hyundai store will be moving to Strandherd Drive in Barrhaven.

Myers Volkswagen - The Myers Automotive Group added Myers Volkswagen to the family and set up the popular German brand's dealership at 501-2500 Palladium Drive in Kanata, in the Palladium Auto Park where Myers Kanata Chev
Buick GMC was also located.

Myers Kanata Hyundai - With the success of the first Myers Hyundai location, it was decided to open another Hyundai location. Myers Kanata Hyundai opened its doors at 400-2500 Palladium Drive in the Palladium Auto Park. This
was the third Myers dealership in the Palladium Auto Park, and all three dealerships still remain in their original places, solidifying the Myers Automotive Group as a key player in the automotive market in the west end of Ottawa.

Myers Orléans Nissan - The Myers Automotive Group opened its first Nissan dealership in the east end of Ottawa, which is still located at 1452 Youville Drive in Orléans. With Myers dealerships located across the greater
Ottawa area, the need to establish a Myers location in the south end of the Ottawa region became apparent with the number of customers making the drive to our other dealerships for their vehicle purchases and servicing. Seeking a
solution for these customers, Myers expanded once again.

In 2012, a fourth Myers GM store, Myers Kemptville Chev Buick GMC, was added to the Myers Automotive Group. Located at 104 Elvira Street, in the town of Kemptville, the dealership is just a short drive from the southernmost
limits of the City of Ottawa. This location also serves a wide area outside of the Kemptville region including such towns and villages as Cornwall, Smiths Falls, Winchester, Osgoode, and many others in between and beyond. Not
wanting to miss an opportunity to expand both locations and brands sold, Myers jumped at the chance to acquire two established dealerships, The Myers Automotive Group welcomed Myers Nissan and Myers Infiniti to the Myers
family and opened its second Nissan dealership as well as its first Infiniti location in September of 2014. Both dealerships are located at 2185 Robertson Road in Bells Corners.

Another new brand joined the Myers Automotive Group in the spring of 2016, when doors opened and cars started rolling off the lot at Myers Barrhaven Toyota. This newly built dealership, and the first Toyota dealership for the
Myers Automotive Group, is located at 4123 Strandherd Drive in Barrhaven and is a quick two minute drive from the Fallowfield Road exit off Hwy 416.

The most recent addition to the Myers Automotive Group is Myers Manotick Dodge Jeep RAM Chrysler, which opened in October 2016. The acquired dealership, formerly known as Celebrity Chrysler, is located at 5791 Prince of Wales
Drive near the village of Manotick in the south end of Ottawa and adds four new brands to the Myers Automotive Group lineup.